A well-known British-American Concert Organist and Improvisator, David Briggs will give a presentation on the preparations necessary to accompany a film at the organ. Topics to be covered include registration, creating different emotions and using melodic motifs. Examples will be given from Mr. Briggs' preparations for "King of Kings" to be presented the next day. Also, if you would be interested in having a private organ lesson at another time with Mr. Briggs during this weekend, please contact Dean, Central Florida Chapter, Mr. Ture Larson, clavier@cfl.rr.com 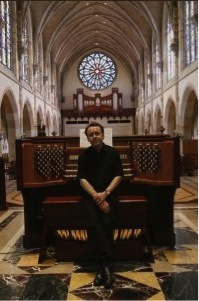 The next day, Sunday, April 10, 2011, 7:00 p.m., Briggs will accompany the silent film, "King of Kings" at the Cathedral Church of St. Luke, 130 N. Magnolia Avenue, Orlando, FL, 32801.
This 1927 Cecil B. DeMile production will be accompanied by Mr. Briggs. Bring your friends and family to witness and hear the drama and message of this film accompanied so appropriately on the organ.
There is no charge for either of these events.
Posted by from Laura: at 8:46 AM