Mormon Tabernacle Organist to perform in Sarasota next Spring


Richard Elliott is right at home at the massive console of the Tabernacle organ, having previously served as an assistant organist for the world's largest functioning pipe organ in Philadelphia's Lord and Taylor (formerly John Wanamaker) department store. His background in jazz and popular music has likewise prepared him well for his role as accompanist for the Mormon Tabernacle Choir, with its broad range of repertoire.


Richard Elliott will be in recital at Faith Lutheran Church, 7750 Beneva Road, in Sarasota, on the Sunday afternoon following Easter, April 15, 2012 at 4 o'clock. Tickets can be reserved at the church (924-4664) for $15 and AGO members with membership cards will be admitted free.


On Saturday, April 14th, at 10 AM at the church, Elliott will conduct a workshop on hymn playing, choral accompanying, and other issues related to the church musician. This event is $10 and is open to anyone. 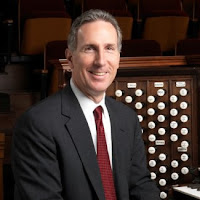 As Principal Tabernacle Organist, Richard Elliott performs, tours and records with the Choir. He also plays for the weekly Music and the Spoken Word broadcasts and joins with his fellow organists in presenting daily 30-minute organ recitals in the Tabernacle. He works alongside the rest of the Choir's musical staff to ensure perfect balance among the singers' voices, the organ and the Orchestra at Temple Square, thus producing the Choir's signature sound. In addition, Elliott performs widely as an organ recitalist and has recorded on the Tabernacle organ for several record labels.
Prior to his appointment in 1991 as a Tabernacle organist, Elliott was an Assistant Professor at Brigham Young University, where he taught courses in organ and music appreciation. His early musical studies were undertaken at the Peabody Conservatory and the Catholic University of America. He earned a Bachelor of Music degree from the famed Curtis Institute of Music in Philadelphia and later received Master of Music and Doctor of Musical Arts degrees from the Eastman School of Music in Rochester, New York.
Elliott is a Fellow of the American Guild of Organists (AGO) and was a featured performer in the Guild's national convention held in 1992 in Atlanta. He is a published composer and has also written articles for several music journals. Elliott currently sits on the advisory boards for the Friends of the Wanamaker Organ and for the Eccles Organ Festival at Salt Lake's Cathedral of the Madeleine.