St Paul's Episcopal Church in Beaufort, NC, wishes to sell their Casavant Tracker Organ. Opus 3507 (1981) has 12 ranks and is a free standing unit tracker. The instrument has two 56 note manuals and a 30 note concave radiating pedal board. All keys and stops are full tracker action. 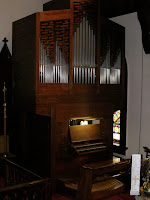 On Sunday, September 26, your Region IV Councillor traveled to Vero Beach, FL, to install the 2010-2011 officers of the Treasure Coast Chapter. The Great Choral Gathering and Service, held at First Baptist Church, Vero Beach, featured a combined choir conducted by guest Daniel Koh. A reception at the church was followed by dinner with AGO members at Citrus Grillhouse. Ah, fun and fellowship!
Posted by from Laura: at 8:47 PM 0 comments

Brennan Szafron, organist, will present an organ recital of music for Halloween and All Saints Day at Holy Cross Episcopal Church, Tryon, NC, Friday, October 29, 2010, 7:00 p.m. Entitled "Saints and Souls Alive!", the concert will include compositions by J. S. Bach, Marcel Dupre, and Leon Boellmann.
A native of Regina, Saskatchewan, Canada, Brennan is the first full time organist and choirmaster of the Episcopal Church of the Advent, Spartanburg, SC. He is also an adjunct instructor in organ performance at Converse College and is the college organist.
Brennan's training as an organist began in Ottawa, ON, Canada, in 1990. He finished high school in Regina, Saskatchewan, where he held his first professional organist positions at St. Peter's Anglican Church and Christ Lutheran Church.
Brennan is the recipient of numerous awards and scholarships. He holds a Bachelor of Music degree, with distinction, from the University of Alberta. At the age of 21, he became a Fellow of the Royal Canadian College of Organists. Further degrees include a Master of Music degree from Yale University and a Doctor of Musical Arts degree from the University of Michigan.
Brennan is an active recitalist, and Holy Cross Tryon is fortunate to feature him on the William E. Seifert Memorial Organ Recital Series. Come and hear the scary and not so scary sounds of the 43-rank chancel organ at Holy Cross, rebuilt by John Dower & Company, Lincolnton, NC in 1994-1995, and played by one of the finest organists in the Southeast.
Brennan Szafron is represented by Concert Artist Cooperative of Sebastopal, CA.
For more information, please contact Susie Mahnke, Organist/Choir Director
Holy Cross Episcopal Church
150 Melrose Avenue
Tryon, NC 28782
828-859-9741
www.holycrosstryon.org
Posted by from Laura: at 7:09 AM 0 comments

Your Region IV Councillor is on the road! On Sunday, September 12, Laura traveled to the Ocala (FL) chapter for the kick-off dinner at the home of Dean Dr. Wayne Earnest (catering from Sonny's BBQ!) On Friday, September 17, Laura 'crashed' the Jacksonville (FL) member BBQ held at the home of Tamara and Thor Wenzel (burgers and a splendid pot-luck!)

Watch this blog for periodic updates from your wandering councillor!
Posted by from Laura: at 9:20 PM 0 comments

"Around the World in 80 Minutes"

Join R. Monty Bennett for a Sonic World Tour of organ music from North America, Asia, Europe and South America. The program will be on Sunday, October 17, 2010, 3:30 pm at Friendship Missionary Baptist Church, Charlotte, NC. For more information, please visit: www.friendshipcharlotte.org  Phone: 704-392-0392
Posted by from Laura: at 11:14 AM 0 comments